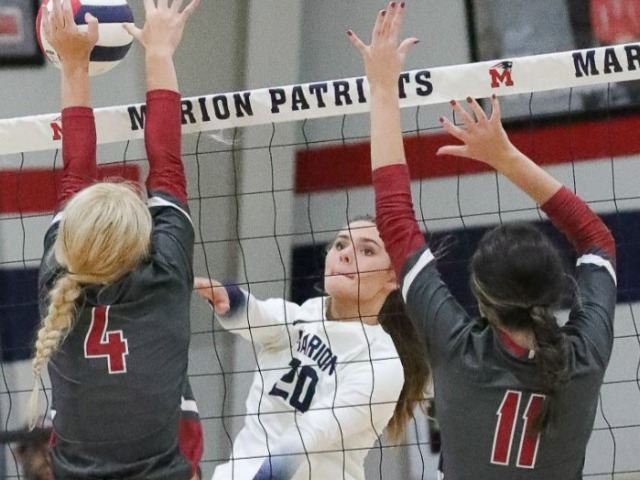 MARION SWEEPS SEARCY ON THE ROAD

Tweet
SEARCY --- The Marion volleyball team fought off one of their longer bus rides before fighting off a hungry pack of Lions on Tuesday night. The Patriots won their second straight conference match in straight sets (25-19, 25-14, and 25-16) at Searcy's (7-8, 0-6) Lion Gymnasium. Marion now sits at 8-6 overall and 4-2 in 5A East play ahead of a massive match on Thursday afternoon against Batesville (6-3, 5-1) at 3M Transit Arena. The winner gains inside position on the No. 2 playoff seed at the end of the first half of league action. The Batesville contest will be broadcast live on MarionPatriots.com and on the Marion Patriots Activities Network mobile app. Marion and Searcy split the first 18 points of the opening set on Tuesday before senior Madison Allison, who earlier on Tuesday played in a tennis match at Searcy, converted a Maggie Miller pass into a kill just before freshman Kennedy Bullins served an ace for an 11-9 Marion lead. Miller dished assists to Bullins, Meredith Williams, and Rucker later in the set as the Pats took an 18-14 lead to force a Searcy timeout. The stoppage did nothing to deter the Miller-to-Rucker connection as the two teamed up for back-to-back kills, and when Searcy hit a ball into the net, Marion's lead reached 21-14. Rucker wouldn't be denied down the stretch, registering four of Marion's final five points as the Pats pulled away for a 25-19 victory. Marion shot out of the gates in the second set, taking advantage of four Searcy errors and kills by Rucker and Bullins to earn a 6-1 lead. Later in the second set, Allison recorded a kill, Williams blocked a Searcy kill attempt, leading to Bullins recording a kill, and when the Lions hit a ball out, Marion led 10-5. Miller later served an ace before setting for an Allison kill for a 15-8 Patriot bulge. Rucker again took over down the stretch, recording three blocks, and two kills to give Marion a 22-11 lead. A Bullins kill and a Searcy error gave Marion a 25-14 conquest in set No. 2. Searcy scored the first three points of the third set, but Marion battled back to tie the frame at 4 when Miller served an ace. A back-and-forth battle ensued until Miller set Aynslee Coad and Bullins for kills that pushed the Pats ahead 11-7 to force a Lion timeout. Williams recorded a kill and a block, and when Williams served an ace, Marion led 18-10. The Pats took their first double-digit lead of the third frame when Taylor Chamness registered a kill. Marion led by as many as 14 points in the third set before settling for a 25-16 victory when Bullins logged a kill. 5A EAST STANDINGS AS OF SEPTEMBER 21 TEAM CONF. RECORD Valley View 6-0 Batesville 5-1 Marion 4-2 Paragould 4-2 Greene County Tech 3-3 West Memphis 2-4 Nettleton 1-5 Searcy 0-6
Back To News
Chuck Livingston
Marion Patriots Activities Network | 9/21/2022
PRIVACY POLICY | © 2022 MASCOT MEDIA, LLC