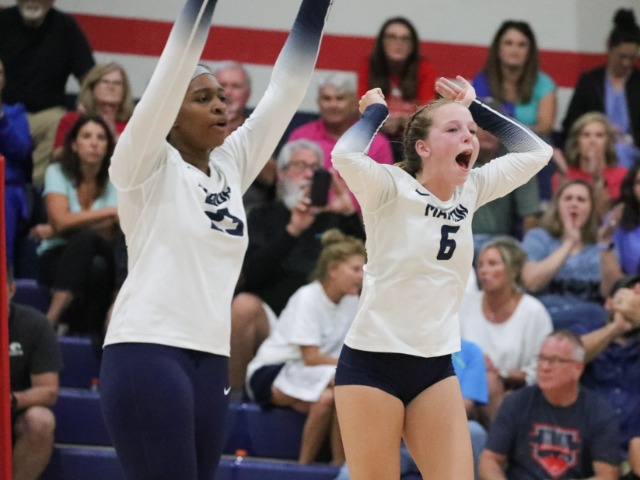 MARION BOUNCES BACK WITH WIN AT GCT

Tweet
PARAGOULD --- Entering 2022 with a team featuring just three seniors, no juniors, and five freshmen, Marion head volleyball coach Lisa Beasley knew that her club would have good moments, as well as bad moments. Thursday night at Greene County Tech will undeniably go down as one of the good ones. Marion fought adversity all night at Eagle Arena, losing a devastating first set before turning the tables on the hosts and clipping the Eagles for a crucial four-set conference conquest (24-26, 25-21, 25-18, and 25-19). The Patriots improve to 7-6 overall and 3-2 in the 5A East, while Tech tumbles to 3-5 and 2-3. Marion travels to Searcy next Tuesday before hosting Batesville next Thursday to complete the first voyage through league play this fall. “I'm just super happy and proud of my girls,” said Beasley. “We had opportunities to give in, but we never did. We didn't always play great, but we played well enough to get a good road win.” A Marion victory seemed unlikely at the start as Tech fashioned an early 12-2 lead. That's when senior Kiah Rucker (team-high 21 kills at GCT) took over, recording three of Marion's next four points to get the Pats within 14-7. Rucker went back to work later in the set as she turned a Maggie Miller (team-high 33 assists) pass into a kill before blocking a pair of Tech kills to bring the tally to 18-15. Three straight Tech points forced Marion's final timeout, but the Pats were undeterred. Rucker sparked a final Marion run with three kills, while seniors Madison Allison (seven kills) and Meredith Williams (six kills and two blocks) tallied points, and when freshman Kennedy Bullins (17 digs, eight kills, and two blocks) stuffed a Tech kill attempt, Marion was within 23-21. Miller's precision passing took center stage down the stretch as she set Bullins and sophomore Alexa Shinabery (20 digs and seven kills) for kills, and Marion had finally come all the way back to tie the set at 24. However, a Marion service error gave Tech a set point opportunity, one that the Eagles took advantage of when Shinabery appeared to drop another kill perfectly into the corner on Tech's side, but the ball was ruled out, giving the hosts a dramatic 26-24 opening-set win. Marion refused to give in during a back-and-forth second set that featured 10 ties. The teams split the first 30 points of set No. 2, but that's when the Pats earned some separation when freshman Kaitlyn Austin (team-high 39 digs) registered a kill before Miller set Bullins for another Marion point. Tech rallied to tie the set at 19, forcing a Marion timeout, but the Patriot response was swift. A Bullins kill and a Tech error forced an Eagle stoppage. Clinging to a 21-20 lead late in the stanza, Marion's seniors carried the Pats to victory. It started with Rucker, who tallied kills on consecutive plays for a 23-20 Marion lead. Then Allison recorded a kill and Williams logged a block to pull Marion even in the match after a 25-21 win. Miller twice set twice for kills by Bullins and Allison, and once to Rucker as Marion scored eight of the first nine points of the third set. Tech crept within 15-11 midway through the third set, but Bullins broke out, recording two kills and a block before Allison and Rucker stacked kills for a 21-16 lead. Shinabery recorded back-to-back kills to set up Bullins, whose kill gave Marion a 25-18 victory in set No. 3. The Eagles scrapped in the fourth set, leading by as many as two points on four occasions, with their largest lead being 11-7. But Williams logged a pair of kills wrapped around a Shinabery ace as Marion trimmed the Tech lead to 11-10 to force an Eagle timeout. Marion finally got even at 13 when Miller assisted on an Allison kill. Marion took the lead for good when Miller and Bullins teamed up on back-to-back plays for a 19-17 Marion lead. Then Marion turned to Rucker down the stretch, and the senior recorded a kill and a block as the Pats won 25-19 in set No. 4. 5A EAST STANDINGS (Top 4 make playoffs) SCHOOL CONF. RECORD Valley View 5-0 Batesville 4-1 Marion 3-2 Paragould 3-2 Greene County Tech 2-3 Nettleton 2-3 W. Memphis 2-3 Searcy 0-5
Back To News
Chuck Livingston
Marion Patriots Activities Network | 9/16/2022
PRIVACY POLICY | © 2022 MASCOT MEDIA, LLC