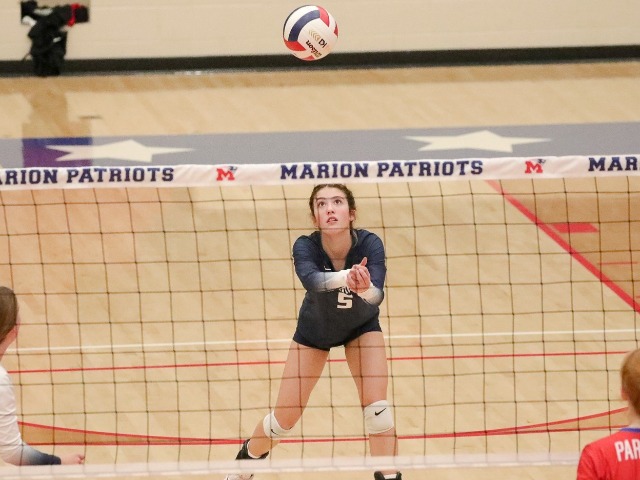 Tweet
After one set on Tuesday night at Fidelity Bank Arena, everything was going according to plan for the Marion volleyball team. The Patriots pulled off an impressive 25-19 victory in the opener over Paragould in what projects to be an important match for state tournament seeding purposes. However, the Ram response was swift. Paragould won the final three sets to down Marion in four frames (19-25, 25-23, 25-19, and 25-18). Marion is now 6-6 overall and 2-2 in 5A East action, while Paragould improves to 2-5-1 and 2-2. Marion, Paragould, Greene County Tech, and West Memphis are currently tied in the conference standings at 2-2. Marion travels on Thursday to Greene County Tech for a contest that contest will be broadcast live on MarionPatriots.com and on the Marion Patriots Activities Network mobile app. Marion and Paragould split the first 22 points of the opening set before the Pats garnered some separation when senior all-conference performer Kiah Rucker (team-high 12 kills against Paragould) turned a Maggie Miller (team-high 27 assists with 16 digs and four kills) pass into a kill just before freshman Kennedy Bullins (15 digs and six kills) delivered Marion's first ace to stake the Pats to a 13-11 advantage. Marion's lead swelled to 16-13 when senior Meredith Williams (nine kills and two blocks) rejected a Paragould kill attempt and forced a Ram timeout. The Pats added to the lead behind Miller's precision passing, as the sophomore handed out assists to Williams and Bullins to advance Marion's lead to 20-15 and force Paragould's final timeout of the first set. The Pats closed out the opener when Williams, Rucker, and Bullins tallied points down the stretch. The teams split the first 16 points of the second set, but Marion took advantage of a pair of Paragould hitting errors just before Williams registered a block and Bullins logged a kill for a 12-8 Marion lead that forced a Paragould timeout. That's when the Rams punched back behind a potent 1-2 punch of Mikayla Lambert (team-high 16 kills) and Keimauri Brown (12 kills). The Rams ripped off four straight points to crawl within 16-14 and force a Marion timeout. Marion pushed back in front 18-16 when Rucker and senior Madison Allison (six kills and six digs) recorded kills, but it was all Paragould from there, as the Rams held Marion at bay to clinch a 25-23 second-set victory. Marion took an early 3-1 lead in the third set as Bullins and Rucker logged kills and Miller served an ace. That lead became 6-3 when Miller set Allison for a kill. Marion's advantage reached 9-5 following back-to-back points from Bullins, but Paragould scored five of the next six points to knot the set at 10. The Ram run continued as the visitors led 15-12 to force a Marion timeout. The Pats pushed back in the late stages of the frame when sophomore Alexa Shinabery (23 digs and two kills) recorded a kill before Miller set Allison and Williams for points and Marion was within 22-16, but Paragould closed a 25-19 victory down the stretch. Miller teamed up with Bullins for a kill to tie the fourth frame at 8, and a Shinabery kill evened the score at 10, which sparked the Pats. Miller recorded a pair of kills, and Rucker one, which gave Marion a 14-11 lead, which forced a Paragould timeout. Paragould scored four of the next five points to tie the set at 15, and following a Miller kill that tied the frame at 17, Paragould never trailed again. The Rams served three aces late in the set to clinch victory. Freshman libero Kaitlyn Austin paced Marion with 25 digs. FAMILIAR FACES IN DIFFERENT PLACES Lisa Beasley is the only coach in Marion volleyball history, while Paragould coach Reed Fogleman has headed up the Ram program since 2015. Adding a layer, Beasley was a standout multi-sport athlete at Paragould, while Fogleman is a Marion native and graduate. HOME-COURT ADVANTAGE Marion's loss to Paragould was the Pats' first regular-season loss at Fidelity Bank Arena since October 8, 2020. On that night, Jonesboro topped Marion in four sets. The Patriots played all of their home matches in 3M Transit Arena until 2019 when the Pats hosted West Memphis at Fidelity Bank Arena. Due to the Covid-19 pandemic, Marion moved its home games in 2020 and 2021 to Fidelity Bank Arena. The Pats were unbeaten in the arena in the 2021 regular year but lost to Benton in the state semifinals when Marion hosted the state volleyball tournament for the first time ever last October. 5A EAST STANDINGS SCHOOL CONF. RECORD Valley View 4-0 Batesville 3-1 Marion 2-2 Greene Co. Tech 2-2 Paragould 2-2 West Memphis 2-2 Nettleton 1-3 Searcy 0-4
Back To News
Chuck Livingston
Marion Patriots Activities Network | 9/14/2022
PRIVACY POLICY | © 2022 MASCOT MEDIA, LLC