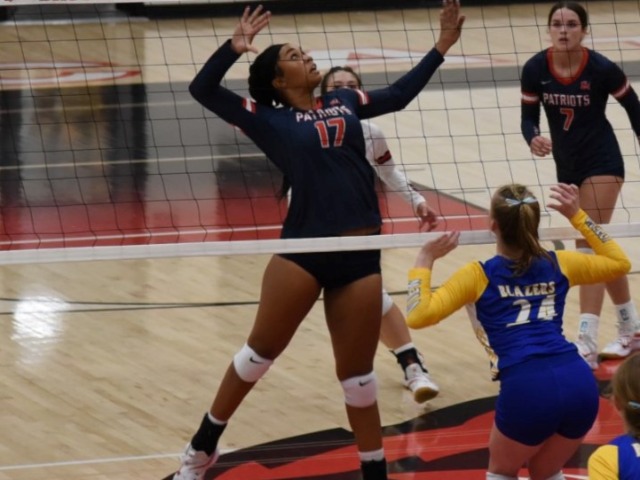 Tweet
WEST MEMPHIS --- Marion entered a hostile environment for a key conference showdown Thursday night here at Lehr Arena, but Marion's mystique won the day. The Patriots erased a late deficit in the opening set, produced one of their more complete performances of the young season in the second stanza, and held off a plucky group of West Memphis Blue Devils in straight sets (25-20, 25-9, and 25-20). Marion (6-5 overall, 2-1 5A East) improves to 35-0 all-time against West Memphis in volleyball. The Patriots return to action next week when the Pats host Paragould on Tuesday at 3M Transit Arena before traveling on Thursday to Greene County Tech. Each of those contests will be broadcast live on MarionPatriots.com and on the Marion Patriots Activities Network mobile app. The opening set witnessed Marion take an early lead as senior all-conference performer Kiah Rucker (team-high 18 kills at West Memphis) recorded back-to-back kills before sophomore Alexa Shinabery (15 digs, five kills, and two aces) turned a Maggie Miller pass (team-high 35 assists) into an assist. When Meredith Williams (five kills) registered a kill, Marion led 8-4. The Marion advantage swelled to 11-5 when freshman Kennedy Bullins (13 digs, eight kills, and two aces) dug a Blue Devil kill attempt out before Miller lobbed a perfect pass back to Bullins for a kill. West Memphis responded when Lillie Dickey served the Blue Devils to eight consecutive points and suddenly the hosts led 14-11. Chloe Fesperman and Dickey each logged a pair of kills during that stretch for West Memphis. Marion rallied when Miller found Rucker for back-to-back kills to tie the set before senior Madison Allison logged a kill to push the Pats back in front 17-16. West Memphis took its final lead at 20-19 when Marion committed a service error, but Miller and Shinabery connected on consecutive points to give the Pats a 21-20 lead and forced a West Memphis timeout. Freshman Taylor Chamness served an ace to close out a dramatic 25-20 conquest in the lid-lifter. The second set was a back-and-forth affair with Marion leading 5-4 early on when Williams pounded a kill into the court before Miller hooked up with Bullins for consecutive points and Marion led 9-4. A pair of Bullins kills book ended a 6-0 Marion run that left the visitors ahead 14-7. Bullins and Rucker hit West Memphis with the finishing blow, combining for seven straight points as the lead swelled to 23-9, and the Pats coasted to a 25-9 win. The teams split the first 34 points of set No. 3 with neither team ever enjoying more than a two-point advantage in the span. Marion took the lead for good when Miller set Bullins and Rucker for back-to-back kills and Williams served an ace for a 20-17 Patriot advantage. Miller took center stage in the late stages, assisting on a Rucker kill before serving an ace for a 24-19 lead. 5A East Standings Valley View 3-0 Marion 2-1 Greene County Tech 2-1 Batesville 2-1 West Memphis 1-2 Nettleton 1-2 Paragould 1-2 Searcy 0-3
Back To News
Chuck Livingston
Marion Patriots Activities Network | 9/9/2022
PRIVACY POLICY | © 2022 MASCOT MEDIA, LLC