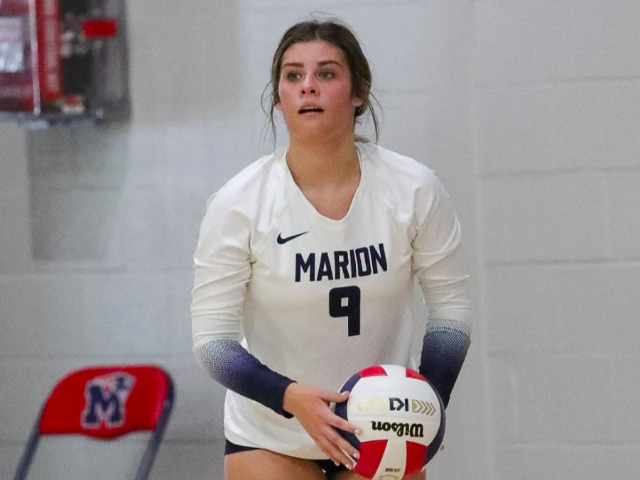 Tweet
With conference play underway, it's extraordinarily important for the Marion Patriot volleyball team to handle business against league rivals, particularly at home. That's why Thursday night's victory over Nettleton at Fidelity Bank Arena could prove so crucial when it comes to playing for playoff position. In its three-set victory (25-13, 25-12, and 25-22) over Nettleton, Marion evens its 2022 record at 5-5 and 1-1 in the 5A East ahead of a week-long bye before a crucial road text next Thursday at West Memphis. "I'm just really happy with how we played in most areas," said Marion coach Lisa Beasley. "We played well on defense, we held our serve when we needed to. There was just a lot to like." Playing at Fidelity Bank Arena for the first time this season due to parent-teacher conferences, Marion scored the first four points of the match, featuring a pair of Kiah Rucker kills, assisted by Maggie Miller. Seniors Meredith Williams and Madison Allison teamed to block a Nettleton kill as Marion pushed ahead 10-4, and when kills from Miller and Kennedy Bullins gave the hosts an 18-9 lead, the Raiders called for time. Williams blocked another Nettleton kill just before Miller assisted on a pair of Alexa Shinabery kills as Marion pulled away for a 25-13 opening-set victory. Shinabery and Miller took center stage in the second set, Shinabery recording a pair of kills while Miller served a pair of aces as the Pats took an early 6-1 lead, and when Kaitlyn Austin served an ace, Nettleton called for time with Marion ahead 10-2. Kills from Williams and Shinabery logged kills as Marion surged ahead 15-3, and when Allison and Bullins each recorded three kills down the stretch of the second set, Marion easily earned a 25-12 win. Nettleton didn't back down in set No. 3, however. The Raiders led most of the early portions of the eventual deciding frame, before Marion got a lift from freshman southpaw Taylor Chamness. With Nettleton leading 7-5, Marion regained the serve and Chamness served line drive after line drive, her run ending with Marion taking an 11-8 lead. The Pats wouldn't trail again. Williams served an ace, recorded a kill, and recorded a block, the latter of which gave Marion a 16-12 lead. When Nettleton crept within 16-15, Bullins, Rucker, Allison, and Aynslee Coad recorded kills to keep the Raiders at bay. Nettleton got within 23-22 before a Bullins block and a Rucker kill gave Marion victory. Marion's game at West Memphis will be broadcast live on MarionPatriots.com and on the Marion Patriots Activities Network mobile app.
Back To News
Chuck Livingston
Marion Patriots Activities Network | 9/2/2022
PRIVACY POLICY | © 2022 MASCOT MEDIA, LLC