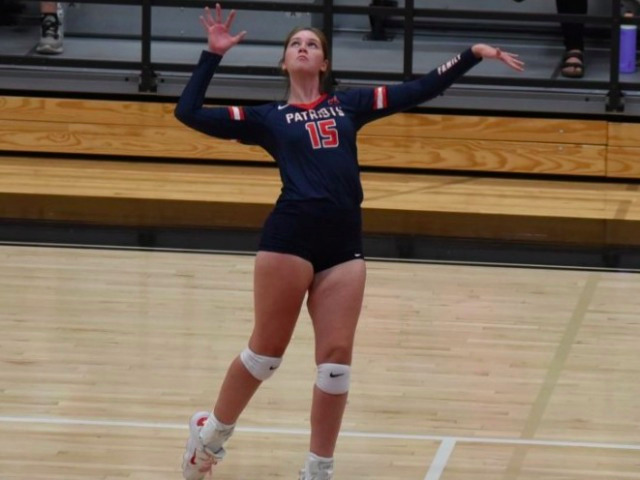 Tweet
JONESBORO --- With the best three-of-five match tied at seven-time defending state champion Valley View, the Marion Patriots appeared to have tied the score at 14 in the crucial third set. After almost a minute of deliberation, the line judges reversed the call and gave the point to the Blazers, who now enjoyed a 15-13 lead. The hosts would never look back, scoring 10 of the next 11 points in the third set en route to a four-set victory (25-22, 18-25, 25-14, and 25-19) in the 5A East opener at Valley View Blazer Arena. Despite the loss, Marion (4-5 overall, 0-1 5A East) moved up to No. 12 in this week's scorebooklive rankings after starting the week unranked. No. 10 Valley View improved to 3-1 and 1-0. Marion bolted out of the gates slowly playing its second game in as many nights as the Blazers scored seven of the first eight points. The Pats hit the comeback trail with a pair of connections between sophomore Maggie Miller and senior Kiah Rucker, an ace from freshman Kaitlyn Austin, and a kill and a block from senior Meredith Williams, the latter of which got Marion within 15-12. Marion got within one point late in the first set (23-22) when Miller set Rucker before the Blazers scored the final two points to earn a three-point opening-set conquest. But the visitors rallied in the second set, scoring three of the first four points and playing with a lead throughout. Sophomore Alexa Shinabery recorded three kills in the early stages of set No. 2, her third tally giving Marion an 8-3 lead to force a Valley View timeout. Valley View trimmed the lead to two later in the set, but Marion bounced back when Rucker and Williams scored on blocks at the net, Williams' point giving the Pats a 15-9 advantage to force the hosts' second timeout of the frame. Freshman Kennedy Bullins, Rucker, and Shinabery logged kills following the stoppage before senior Madison Allison took over down the stretch, three times turning Miller passes into assists to push the Pats to the brink of victory. A Miller-to-Bullins connection gave Marion a crucial victory in the second stanza. The third set was a nip-and-tuck battle with neither team giving in. Miller served a pair of aces before setting for Allison, Rucker, and Bullins kills as Marion led 7-5 early on. The Pats pushed their lead to 9-8 following a Rucker kill, but Valley View responded by scoring five straight points to force a Marion timeout. That's when the Pats pushed back by scoring on defense as Allison, Rucker, and Williams blocked Valley View kills at the net to creep within 14-13. The controversial point centered around whether or not Marion tipped a Valley View kill attempt that landed out of bounds. Both line judges initially gave the point to the Pats that would have tied the score at 14. However, after a conference, the line judges changed the call to say that Marion tipped the ball, giving the point to Valley View. That's when the Blazers took over, scoring nine straight points to comfortably earn a 25-14 victory to push ahead 2-1 in the match. Marion didn't back down facing elimination in the fourth set, splitting the first 14 points with Valley View. The Blazers added some separation by scoring six of the next eight points to force a Marion timeout, but the Pats responded when Rucker blocked a kill, Miller assisted on a Shinabery kill, and when Bullins blocked a kill, Marion was within 15-11. Marion's last stand came when Bullins turned a Miller pass into a kill, Shinabery served an ace, Williams blocked a kill, and the Pats took advantage of an errant pass, the visitors were within 22-18 before Valley View turned the Pats away for good. Marion returns home Thursday night when it hosts conference rival Nettleton at Fidelity Bank Arena. That contest will be broadcast live on MarionPatriots.com and on the Marion Patriots Activities Network mobile app. The event will begin at 4:30 p.m. With varsity action cranking up around 6:30 p.m.
Back To News
Chuck Livingston
Marion Patriots Activities Network | 8/31/2022
PRIVACY POLICY | © 2022 MASCOT MEDIA, LLC