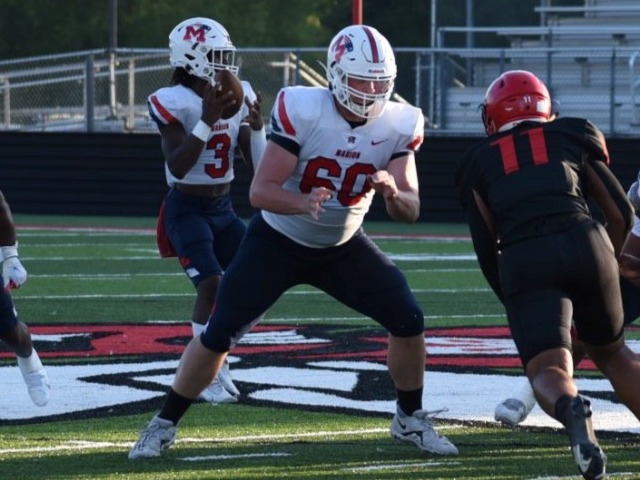 Tweet
WYNNE --- Marion drove the ball efficiently all night long last Friday night, but the Patriots struggled to close drives in its 21-10 loss to Wynne at Yellowjacket Stadium. The Pats (0-1 overall) outgained the Yellowjackets 318-247, but committed four turnovers and four more turnovers on downs, including two turnovers and two turnovers on downs inside Wynne's 20-yard line. “Ultimately, we just didn't execute when we needed to,” said second-year coach Lance Clark. “It's hard to imagine winning any game when you make the type of mistakes we made. We saw some positives, and we'll get it fixed.” Marion's special teams attempted to keep the Pats in the game despite the offense's struggles. Trailing 7-0 early in the second period, Marion senior defensive end Antanius Tiggs blocked a Wynne punt that Brian Weatherspoon fell on at the Wynne 8-yard line. The Pats turned the block into three points when senior Ben Cherry's first varsity field goal was good from 23 yards trimmed the Wynne lead to 7-3 with 7:06 remaining in the first half. The Pats' kicking game came up big again on the ensuing kickoff when Cherry lofted a perfect sky kick that JaKobe Smith recovered at the Wynne 40-yard line. Marion took its only lead of the game five plays later when sophomore tailback Jalen Smith ran 7 yards to glory for a 10-7 advantage with 5:30 left. “I couldn't be happier with the special teams, they kind of carried us at times,” added Clark. Wynne took the lead for good on its final drive of the first half when the Yellowjackets took advantage of a Marion interception and marched 23 yards in four plays, culminating when fullback Cobe Davis ran 4 yards for a 14-10 Wynne lead that doubled as the halftime score. Davis paced Wynne with 92 rushing yards on 14 carries. “I thought that was big to go in at the half ahead just for our mentality," said Wynne coach Van Paschal. “With us being so young, we had some success early on and were able to carry it on. We wanted to take what they gave us, which wasn't much, but we made the most of our chances.” Wynne forced a Marion turnover on downs on the initial drive of the third quarter and converted it when the Yellowjackets covered 44 yards in nine plays, capped off by quarterback John Watson's 1-yard plunge for a touchdown and a 21-10 advantage. Marion's final three drives of the game ended at the Wynne 17-yard line on a turnover on downs, on the Wynne 2-yard line when the Pats lost a fumble, and at the Wynne 4-yard line on an interception. Junior Marion QB Ashton Gray completed 13 of 25 passes at Wynne for 170 yards, rushing for 22 yards. Smith bolted for a team-high 92 yards, while senior receiver Donnie Cheers snagged seven passes for 90 yards. Marion is off this week and will return to action on Friday, September 9 when the Pats host defending Class 6A state champion El Dorado at Premier Bank Stadium. Kickoff is scheduled for 7 p.m. And the contest will be broadcast live on MarionPatriots.com and on the Marion Patriots Activities Network mobile app.
Back To News
Chuck Livingston
Marion Patriots Activities Network | 8/29/2022
PRIVACY POLICY | © 2022 MASCOT MEDIA, LLC