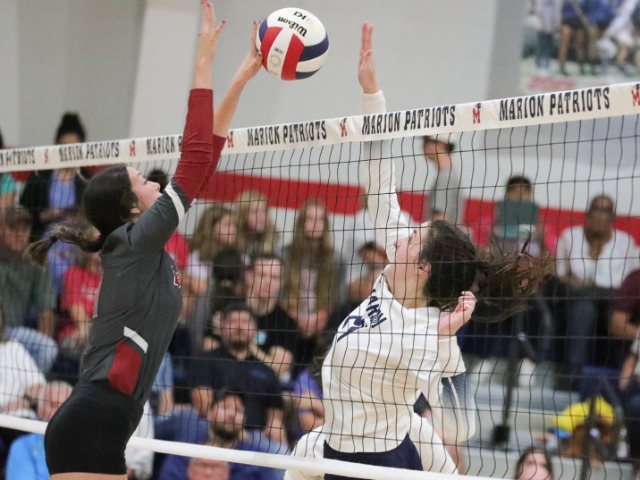 Tweet
Marion head volleyball coach Lisa Beasley believes in playing top competition to prepare her team for extended playoff runs. That philosophy brought Tennessee state power Collierville to 3M Transit Arena on Thursday night. Beasley's Pats scrapped, igniting a massive student section with an opening-set victory, before falling in four sets (21-25, 25-20, 25-15, and 25-17). “I never like to lose, but I was encouraged tonight by how we played a great program,” said Beasley. “They're big and fast, and they play a fast tempo on offense. I'm tickled to death because I thought we played hard and gutsy. We had opportunities to get closer at times, but couldn't get it done. But we'll get there.” A healthy crowd helps Marion (1-1 overall) erase an early 2-0 Collierville (6-3 overall) lead. Marion strung together four straight points to take the lead for good when senior Kiah Rucker (team-high 17 kills) turned a Maggie Miller (team-high 38 assists with three kills and two aces) pass into a kill before Miller delivered back-to-back aces to give the Pats a 7-4 lead. Senior Meredith Williams (team-high four blocks with three kills) came up with two blocks, the second of which gave the hosts a 14-8 lead to force a Collierville timeout. Sophomore Alexa Shinabery (seven kills with a team-high three aces) served an ace and a Williams kill gave Marion its largest lead of the match at 18-8. The Dragons rallied and got within 24-21 before Miller found freshman Kennedy Bullins (10 kills with eight digs and two blocks) for the set-clinching kill. Rucker opened the second set as she finished the first, recording kills on three of Marion's first four points as the Pats bolted to an early 4-2 advantage. Freshman Taylor Chamness (six digs, two aces, and one kill lobbed an assist to Shinabery before serving an ace to push Marion's lead to 7-4. Shinabery logged a kill and served an ace as Marion surged ahead 10-6. Collierville responded to the early Marion spurt by scoring five of six points, including three straight kills from junior Campbell McKinnon to tie the set at 13 and force a Marion timeout. A Miller-to-Rucker connection tied the contest at 14, but that was as close as the Pats would get the rest of the way and Collierville tied the match with a 25-20 conquest. It was the Dragons generating the fast start in the third set, taking a 3-0 lead, featuring a pair of Campbell kills. Marion got back into it behind a pair of Rucker kills and an error, paving the way for a nip-and-tuck battle featuring the teams splitting the next eight points. Collierville scored six of the next seven points, but Williams logged a kill and a block to get Marion within 18-14, but the Dragons limited the Pats to one point down the stretch for a 25-15 victory in the third frame. Kills by Rucker and Shinabery kept Marion in the mix early in the fourth set, but Collierville scored four straight to open up a 6-2 lead, which forced a Marion timeout. Rucker responded to the stoppage by twice turning Miller passes into kills, and blocking a kill attempt, and when freshman Aynslee Coad (two kills) logged a kill, and Williams registered a block, Marion had tied the set at 7. Bullins blocked a kill attempt and served an ace to get Marion within 10-8, and when Miller found Rucker and Coad on consecutive points, the Pats were back within 14-12. Collierville scored the next four points, but the Pats took advantage of a pair of errors before freshman Kaitlyn Austin (team-high 24 digs) served an ace before making an athletic play on a kill attempt that led to a Williams kill, which moved Marion within 18-15. Marion scored three straight points late in the fourth set when Shinabery and senior Madison Allison (seven kills) logged kills and Chamness served an ace, but Collierville scored four of the last five to clinch victory. The Marion junior varsity bested Collierville in a best-of-three match (25-22, 16-25, and 15-6). Marion plays this weekend in the River City Classic in Memphis before traveling to Wynne for a non-conference date on Monday evening before opening league play Tuesday night at perennial state power Valley View on Tuesday. Marion hosts Nettleton on Thursday, September 1. The Wynne, Valley View, and Nettleton contests will be broadcast live on MarionPatriots.com and on the Marion Patriots Activities Network mobile app.
Back To News
Chuck Livingston
Marion Patriots Activities Network | 8/26/2022
PRIVACY POLICY | © 2022 MASCOT MEDIA, LLC