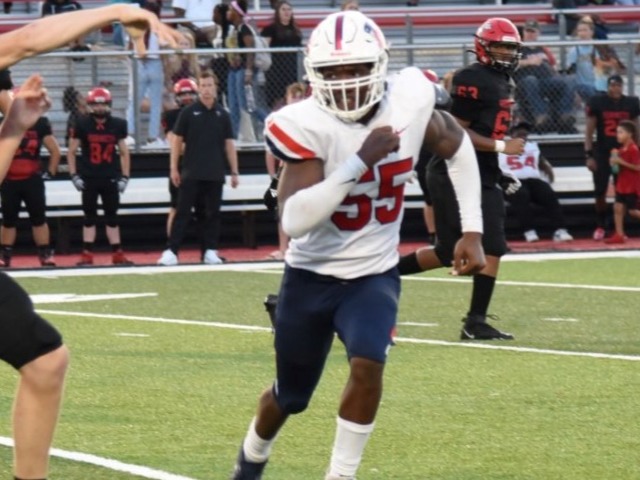 Tweet
Despite the new-look, 10-team 6A East conference in action this season, Marion will kick off its 2022 football season with its oldest active rivalry. Marion and Wynne have met every season since 1969, with the Yellowjackets owning a 33-12-1 series advantage. The latest installment of the Marion-Wynne saga kicks off at 7 p.m. Friday night at Yellowjacket Stadium. The Pats' only non-conference game of 2022 will be broadcast live on MarionPatriots.com and on the Marion Patriots Activities Network mobile app. Despite Wynne's lead in the series, some of the bigger victories in Marion football history have come over the Yellowjackets. The rivalry launched in earnest in 1970 when the teams were members of the 2AA-North. The Pats matched their school record for victories in a season with eight that fall, including a conquest of Wynne. A 1984 victory over Wynne catapulted Marion into a second consecutive playoff appearance, and earned the Pats a share of their first-ever league title. Marion residents celebrated the victory by driving around town and honking their horns following the victory. Wynne dominated the Marion series over the next 21 seasons as the Yellowjackets emerged as a state power with state titles in 1986 and 2001. The Pats finally got the best of the Yellowjackets again in 2005 when Marion took down a dramatic double-overtime victory (13-10) over Wynne at Premier Bank Stadium. The Pats tied the game late in regulation when Jerry Patton boomed a 41-yard field goal to knot the score at 10. Patton won the game on a chilly October night with another lengthy field goal. While Marion bumped to Class 6A and Wynne stayed in Class 5A following the 2005 season, the schools have continued to meet in non-conference action every season. The Marion-Wynne non-conference series is knotted at 8 apiece after Marion forfeited last season's 24-21 victory. “Wynne is the most important game of the year because it's the next game,” said second-year Marion football coach Lance Clark. “They always play us tough, and it's an important game to our community, so we need to win it. We expect a big crowd, and a fun atmosphere.” Marion has already responded to one road test so far this month. Well, sort of. The Pats impressed many last week in a 35-14 benefit scrimmage victory at Class 5A power Maumelle. Marion led Maumelle 28-0 after one half of varsity action, scoring on their final three offensive drives and surrendering only four first downs. As impressive as the Pats were one week ago in unfamiliar territory, “we must turn the page this week,” said Clark. “We saw a lot of things that we liked at Maumelle, but we have to duplicate that same effort and intensity this week. We can't have a letdown.” Wynne operates sixth-year coach Van Paschal's patented Flexbone with precision. The Yellowjackets return five starters on offense, but only two-time all-conference center Birk McBride returns in the offensive line. Junior John Watson returns at quarterback, while Cobey Davis and Allen Jones run hard as fullbacks. Alonzo Holmes plays slotback with 4.6 speed. Graduation depleted the Wynne defense even further with just two starters projected back, but “they're at the point in their program where they can more easily replace guys,” said Clark. “Their guys are so comfortable in the schemes by the time they get to the high school that they can produce quicker. That's a point that we're trying to get to, so this will be a good litmus test for us.” Marion continues to start just one senior on offense, but wideout Donnie Cheers caught four passes at Maumelle for 80 yards, including a pair of electrifying touchdowns. The Pats will likely start as many as seven seniors on defense at times this season, including veterans Jerrimiah Nichols, Garrett Dickerson, and Antanius Tiggs in the defensive line, linebackers Carter Waldo and Brian Weatherspoon, and cornerbacks JaKobe Smith and Tucker Brown. POLL POSITION Marion opens 2022 at No. 8 in the hootens.com weekly rankings after 6A East coaches picked the Pats to finish third in the league behind defending state champion El Dorado and perennial 6A power Benton. Hootens.com ranks Wynne fourth in this week's Class 5A rankings, and 5A East coaches picked the 'Jackets to win the league crown. WEEK 0 CLASS 6A SCHEDULE All games scheduled for 7 p.m. Kickoff 6A East Marion at Wynne White Hall at Sheridan North Little Rock at Little Rock Catholic Maumelle at Sylvan Hills Jonesboro at West Memphis Jacksonville at Beebe Greene County Tech at Paragould Searcy at Batesville Benton vs. Bryant (Little Rock) 6A West Alma 27, Van Buren 7 (Tuesday night) Greenwood at Stillwater, Okla. Little Rock Christian at Little Rock Central Siloam Springs at Rogers Heritage Nettleton at Mountain Home Joe T. Robinson at Pulaski Academy Russellville at Morrilton Lake Hamilton at Hot Springs Lakeside
Back To News
Chuck Livingston
Marion Patriots Activities Network | 8/25/2022
PRIVACY POLICY | © 2022 MASCOT MEDIA, LLC