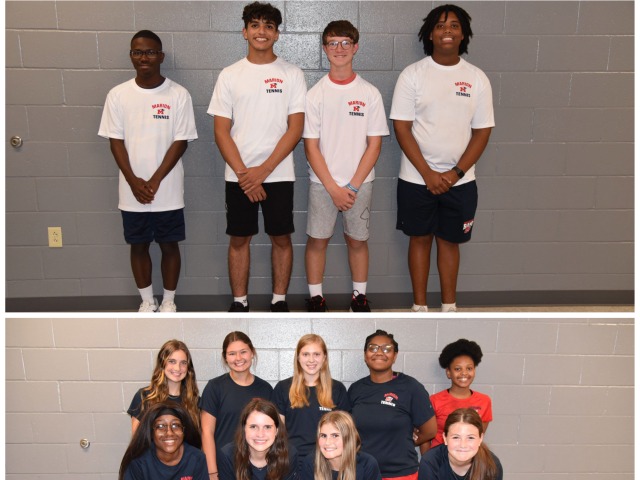 Tweet
As school ramps up in Marion, so too does the 2022 tennis season, and the Patriot netters enter the fall with high expectations. The Lady Pats look to replace their all-state doubles tandem of Kelly Pedersen and Kora Wilson, who last season finished third in the state. Marion's boys boast four talented players who have produced big off-seasons. On the girls side, senior standout Margaret Crain anchors Marion's singles squad for a fourth season. Crain “has been one of, if not our best, singles player for three years now,” said Marion girls coach Ashleigh Rakestraw. “I have high hopes for her this year. She can do it all.” Akeylah Lathan, Madison Allison, and Lily Holloway all played well during the first two weeks of school and “will be heard from,” said the coach. Rakestraw shuffled her doubles combination during the off-season, leading to three capable pairings. Senior Avery Boney and Kaden Foret “have a natural connection,” said Rakestraw. Boney is a doubles veteran, who's played extensively in varsity action in her career. Piper Randolph and Aubrie Weaver “are excellent communicators,” said Rakestraw. “They've played volleyball together, so they have that connection on the court.” Julian Banks, who played last year for Marion, teams with newcomer Scarlett Knowlton this fall. Marion's boys team lost two projected returners from a season ago this off-season, but “we are excited about the kids we still have,” said second-year boys coach Jamie White. “They've all worked really hard this off-season and grown a lot.” Elijah White, son of the coach, spent his off-season playing in competitive tournaments across the region. “I think he can improve his record against some of his peers this year,” said Coach White. “He will draw closer there.” Kobe Hayes impressed Coach White by “often running the bleachers this summer,” she said. “He wanted to play singles and he's taken the next step.” Lewis Stewart and Ubay Esmail comprise Marion's doubles tandem. Marion opens its 2022 tennis season Tuesday, August 9 at 4 p.m. Against Wynne before launching league play at home on August 18 at 4:00 against West Memphis.
Back To News
Chuck Livingston
Marion Patriots Activities Network | 8/9/2022
PRIVACY POLICY | © 2022 MASCOT MEDIA, LLC