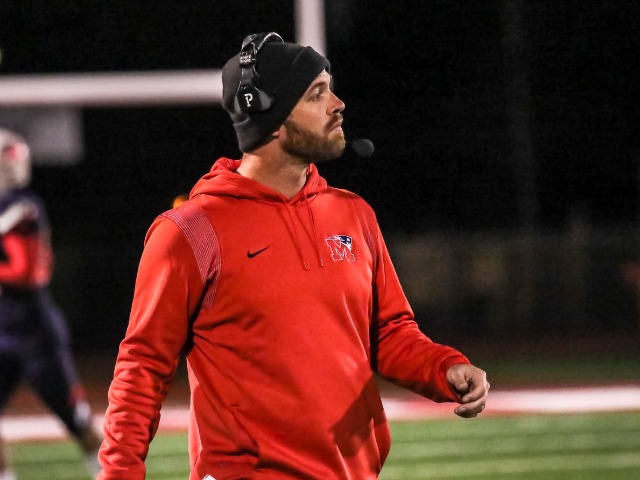 Tweet
Typical July heat and an early-morning start did little on Monday to deter the Marion Patriots. Fresh off back-to-back appearances in the state semifinals, and impressive performances in June at 7-on-7 tournaments and team camps, Marion went through its first official practice of the 2022 football season at Premier Bank Stadium. Marion football players from seventh grade to the senior high populated from 8-11 a.m. Monday morning as the players split time between the field and the indoor facility. “I thought our learning retention and attention to detail could have been better in areas today, but all things considered I was pleased,” said second-year Marion football coach Lance Clark. “The team chemistry has come a long way. The leadership is starting to emerge a little bit right now, too.” The opening of fall camp Monday morning came on the heels of a prosperous June schedule that saw the Pats compete well and impress opposing coaches at the 22nd annual Shootout of the South 7-on-7 tournament at Pulaski Academy. Marion finished 3-2 in pool play in Little Rock, good for third in that grouping behind Conway and Heritage Hall, Oklahoma. The Pats outpaced Class 6A rivals Benton and Monticello, as well as Miami, Oklahoma in Pool A. In the opening round of the regional tournament, Marion topped Keller, Texas 23-9 to qualify for the knockout round. In the second round of the regional tournament, the Pats bounced Sherman, Texas 28-14 to earn the Conway Glass bracket championship. Four-time defending Class 7A champion Bryant eliminated Marion 35-28 in the first round of the knockout round. Bryant went on to beat Conway for the 2022 Shootout of the South tournament title, but no team played Bryant closer in tournament play than Marion. “By the end of June we were clicking pretty good,” said Clark. “Our first few team camps and 7-on-7s were fairly sloppy, particularly compared to where we wound up. In our last team camp at Wynne we looked pretty good and were progressing nicely. We'd gotten better with every event that we took part in.” Following the Wynne team camp, Marion took a two-week break to observe the Arkansas Activities Association's dead period, allowing student-athletes and coaches a break. Marion opens its 2022 season on Friday, August 19 at 6 p.m. At Class 5A power Maumelle, but “we have a lot to get done between now and then,” warns Clark. “We have to start gelling on the offensive line. We are getting better, but we strive for consistency. Defensively is all about getting the right kids on the bus into the right seats. I think we are now driving the right bus, with the correct kids in their proper seats. We have to gain some confidence and build depth. So we are excited for Maumelle and that challenge, but we have other things to square away first.”
Back To News
Chuck Livingston
Marion Patriots Activities Network | 7/11/2022
PRIVACY POLICY | © 2022 MASCOT MEDIA, LLC