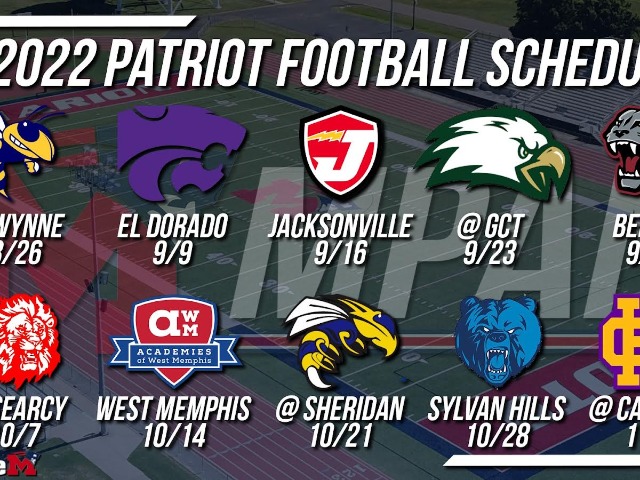 Tweet
A new-look 10-team conference and subsequent nine-game league slate highlight the 2022 Marion football schedule. Marion's quest for a third consecutive semifinal appearance begins on August 19 with its benefit scrimmage at Class 5A contender Maumelle. While the Maumelle preseason tilt will not count towards Marion's 2022 record, the Pats' August 26 contest at traditional rival Wynne will. A 24-21 victory over the Yellowjackets last August at Premier Bank Stadium kickstarted the Pats' run to the final four. Following a September 2 bye, Marion welcomes defending Class 6A state champion El Dorado to Premier Bank Stadium for its home and conference opener on September 9. The Wildcats dealt the Pats two of their five losses a season ago, including a 60-27 semifinal conquest that launched El Dorado into the state title game. Marion stays at home for its September 16 game against Jacksonville, the first meeting of the schools since the Patriots beat the Titans 20-6 in 2017. The Pats take their show on the road on September 23 when they play at old Class AAAA rival Greene County Tech. Marion has not played Tech since routing the Eagles 82-51 on September 16, 2011. Marion puts its perfect all-time record against Benton on the line on September 30 at Premier Bank Stadium. The Pats are 3-0 against the Panthers, including a decisive 59-37 conquest in last year's quarterfinal game at Benton. The Pats picked up a 2020 first-round playoff forfeit from Benton, Marion won the only other meeting between the schools at Marion 42-33 in the first round of the 2011 playoffs. The Pats look for their first victory at Searcy since 2016 on October 7. Searcy has won eight of the last 10 meetings with Marion, but the Pats dumped the Lions last October at home. October 14 witnesses Crittenden County's hottest rivalry renewal when West Memphis visits Marion. Marion vanquished West Memphis 33-3 last season on the field before later forfeiting that victory due to an ineligible player. It marked Marion's first win over West Memphis in football, and the Pats have never beaten the Blue Devils in Marion. Marion will play at Sheridan for a second straight season when the Pats invade Grant County on October 21. Marion is 2-0 against Sheridan all time, including a 42-12 win in 2021. The Pats get an opportunity to avenge one of their losses of a year ago on October 28 when Sylvan Hills comes calling. The Bears never trailed in last year's 24-10 victory over Marion. Marion caps its season on November 4 with a trip to the state capital to play Little Rock Catholic. The Rockets have competed in the state's largest classification since 1983 but bumped down to Class 6A following the Arkansas Activities Association's latest reshuffling, featuring new rules regarding private schools like LR Catholic. The top six teams from the 10-team 6A East will qualify for this season's playoffs. Marion has qualified for the postseason for 17 consecutive seasons. Special dates such as homecoming and other themed home games will be released as more information becomes available.
Back To News
Chuck Livingston
Marion Patriots Activities Network | 6/2/2022
PRIVACY POLICY | © 2022 MASCOT MEDIA, LLC