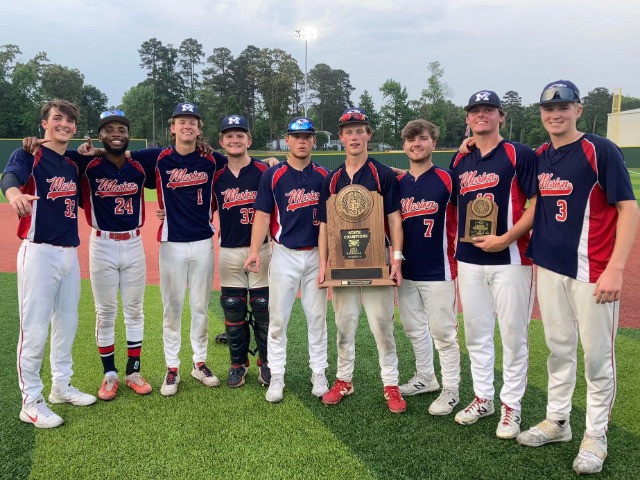 Tweet
A championship season is often defined by numbers, and the 2022 Marion Patriots are no different. Marion won the 2022 Class 5A state baseball championship with a sterling 29-5 record behind enormous contributions from nine seniors, but there are always some leftover stats and figures that boggle the mind. Here are just a few: 1- Popular high school sports website Maxpreps.com ranked the fightin' Pats as the No. 1 team in Arkansas following Saturday's 11-6 victory over Van Buren for the crown. Marion edged out Class 6A powers Rogers (30-7 overall), and Har-Ber (26-8) for the top spot. Van Buren finished fourth. 3- Marion victories over fellow Top 10 teams per Maxpreps.com. In addition to the final victory over 6A West champion Van Buren, the Pats earned a midweek non-conference victory over No. 5 Valley View in April and split a conference doubleheader with No. 6 Jonesboro. 16- Consecutive victories to finish 2022. It's hard now to fathom, but Marion wasn't gangbusters out of the gates in March and into early April. The Pats were 13-5 following an April 9 loss to Class 4A contender Lonoke at a tournament classic in Jonesboro. Marion circled the wagons later that afternoon, jumped Joe T. Robinson for an 8-1 victory, and did not absorb another loss this spring. 21- Times that Marion limited its opposition to one run or fewer in 2022. Statistically speaking, you'd have a better chance at seeing Halley's Comet in your lifetime than you would have scoring two or more times against the 2022 Patriots. This number is crazy, but the next figure might be more insane. 13- Shutouts recorded by Marion in 2022. The Pats won 29 times this spring, meaning that they barred the opposition from the scoreboard in almost half of their victories. 5- Consecutive shutouts against state-tournament teams. The run started on Wednesday, May 4 in the first game of a conference doubleheader at Greene County Tech. The Pats took down a 5-0 victory in the first game before clinching a share of the 5A East championship and the No. 1 playoff seed with a 6-0 conquest in the nightcap. The dueling shutouts paved the way for... 20- Scoreless Innings logged by the Pats en route to a 3-0 record at the state tournament in Hot Springs. Marion played three games at the highest level of competition, including traditional rivals Benton and Sheridan, without allowing a run to score. 21- Double plays turned by Marion this season. The Chicago Cubs early 1900s dynasty penned songs about their killer double-play combo of Evers to Tinkers to Chance, but Marion's version of (Payton) Voyles to (Connor) Brinkley to (Connor) Taylor recorded 14 twin-killings in 2022. Senior stud Chase Armstrong and sophomore utility man Matthew Kearney each recorded two double plays of their own. .961- Marion's team fielding percentage. Pretty self explanatory as more than 96 percent of balls in play were turned into outs by the stingy Patriot defense. 1.27- Marion's team ERA. Good pitching and good defense go together like a hand in a glove. It can be a chicken-or-the-egg argument, but the Patriot pitching staff often handcuffed batters at a rate not seen since Cy Young or Christy Mathewson. 3- Pitchers committed to SEC schools that Marion defeated this spring. The run started on Monday, April 18 when Armstrong clubbed a two-run home run and teamed up with Ben Gerrard and Gage Watson for a 3-2 victory over Ole Miss signee Grayson Saunier. Eight days later, 5A East rival Batesville threw University of Arkansas signee Austin Gage Wood in the first game of a varsity doubleheader at First National Bank of Eastern Arkansas Stadium, home of John Robbins Field. Armstrong smoked a two-run home run off of Wood and struck out 12 Pioneers in a complete-game 2-1 victory that pushed the Pats closer to a conference title. On Saturday, April 30, Sophomore Davis York opposed Briarcrest Christian lefty Matthew Dallas, a Tennessee commit, and the Pats took down a 2-1 victory at home. 10- Combined margin of defeat in Marion's five losses. The Pats were never out of a game in 2022, losing five times by an average of two runs. Of the five losses, three were two runs or fewer.
Back To News
Chuck Livingston
Marion Patriots Activities Network | 5/24/2022
PRIVACY POLICY | © 2022 MASCOT MEDIA, LLC