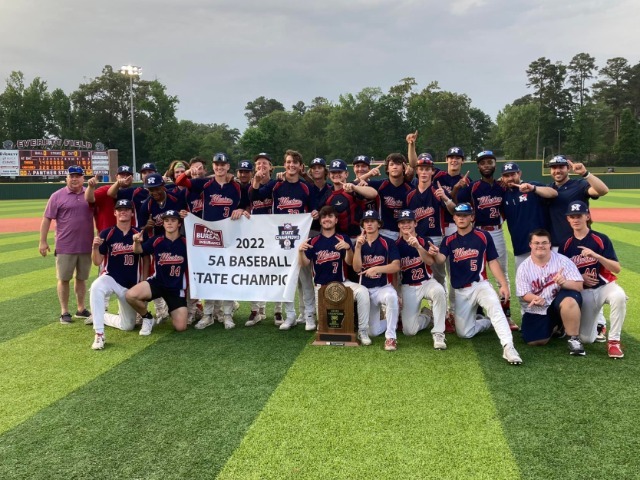 Tweet
BENTON --- Marion senior right-hander Ben Gerrard's 100th pitch of the afternoon retired Van Buren centerfielder Malachi Henry, who'd reached base in his previous four at bats. Most importantly, Gerrard's sixth punchout of the afternoon delivered Marion the first state baseball title in school history. Marion struck for 11 runs in the first two innings, seven in the first frame, and never trailed in Saturday's Class 5A baseball final at Benton Sports Complex. The Patriots capped a 29-5 final record with an 11-6 victory over 5A West champion, and defending state champion, Van Buren (26-6). Gerrard earned title game MVP honors after working the final 5.2 innings in relief, striking out six Pointers, scattering five hits, and allowing just one run. Gerrard pitched 12.2 innings during the state tournament, tallying 16 strikeouts, and allowing just one run in victories over Benton and Van Buren. Van Buren starter Devin Gattis absorbed the loss. Marion ends 2022 with 16 consecutive wins, and the Pats' 29 victories also established the single-season school record for wins. “Our guys did a great job jumping on their top two guys tonight,” said fifth-year Marion coach Pete Prater. “We wanted to make them make plays, and we barreled a lot of balls up, even some that didn't turn into hits. I'm just beyond proud of these guys.” Marion marched 11 batters to the plate during that seven-run first inning, loading the bags when leadoff man Gage Watson (1-3 against Van Buren with two RBI, and a run) reached on an error, Payton Voyles walked, and Chase Armstrong (2-4) singled. Gattis balked in Watson for the game's first run. Marion junior first baseman Connor Taylor (2-4, two runs scored, and an RBI) pulled a ball to Van Buren first baseman Jackson Rotert, who threw to the plate to try to cut down Voyles, but the Marion second baseman slid under the tag for a 2-0 Marion advantage. Sophomore third baseman Matthew Kearney dropped a perfect sacrifice bunt to score courtesy runner Landon Miller, who was representing Armstrong. Marion senior leftfielder Luke Bullins (1-3 with two runs, an RBI, and a walk) rang a single to left field to plate Taylor for a 4-0 bulge. A Connor Brinkley (1-3 with a run, a walk, and an RBI) free pass gave the Pats two runners on with two outs for left-handed-hitting Kaleb Catt (2-3 with two RBI, a walk, and a run) who drove the ball to the left-center field gap. Bullins and Brinkley, who were running with the pitch, easily scored as Catt slid into third as his clutch three-bagger gave Marion a 6-0 advantage. A Watson single scored Catt and Marion led 7-0 entering the bottom of the first. Armstrong started on the bump against Van Buren, and the Pointers responded with a three-spot in the home half of the first, though only one was earned, and Marion led 7-3 after a frame. The Pointers went to the bullpen before the second, tabbing Eli Gilreath to stem the potent Marion attack. Instead, the Pats ramped back up when Dylan Kight, Armstrong, and Taylor led off the second stanza with singles to load the bases with nobody out. Bullins took four straight balls to walk in a run just before Brinkley singled in Armstrong. Catt walked to force in Taylor, and Watson's sac fly plated Bullins for an 11-3 Marion lead. Gilreath clubbed a two-run home run in the bottom of the second with one out, when Prater summoned Gerrard from the bullpen. The first two Pointers reached against Gerrard before the senior right-hander induced a hard groundball off the bat of designated hitter Hayden Hurst to Voyles at second, who flipped to Brinkley, who completed the double play by firing a strike to Taylor at first. Inning over. “Our defense wasn't as solid early on today as it's been,” said Prater. “We needed something like that to kind of settle us in.” The third Pointer pitcher proved to be the most effective, as Connor Brady took the ball in the top of the third and barred the Pats from the scoreboard, and allowed just two hits the rest of the way. Gerrard retired Van Buren in order in the third before the Pointers scratched a run across in the bottom of the fourth to get within 11-6. Van Buren threatened again in the bottom of the fifth when shortstop Breckin Waters reached on an error, James Nowotny walked, and Henry singled to load the bases with two outs, but Gerrard wiggled out of the jam by striking out Presley Nichols to strand the bases loaded. The Pointers had two runners in scoring position with one out in the bottom of the sixth before Armstrong caught a pop-up in foul ground and Brinkley stole a hit from Waters on a line drive to end the threat. Gerrard returned to the mound in the seventh and got Nowotny to ground out to Brinkley for the first out before Gattis popped out to Taylor. Gerrard struck Henry out looking on a full count to incite the dogpile on the mound to the delight of the assembled Marion faithful. “It's the biggest moment of my life so far,” said Gerrard. “My mentality today was just to come in and get outs. This is just an unbelievable moment, and I'm glad I got to share it with my guys.” NOTES It was the last varsity game for seniors Armstrong, Kight, Gerrard, Voyles, Brinkley, Bullins, Watson, Catt, and Tyler McGinnis. Armstrong (Arkansas State), Watson (Missouri), Kight (UA-Rich Mountain), Bullins (Rend Lake), Brinkley (Southwest Tennessee), and Voyles (Graceland) will continue their baseball careers in college. The state championship capped a banner season for Marion baseball which established a single-season mark for victories, en route to the school's first regular-season conference title. Marion won the 5A East district tournament title in Prater's first season (2018).
Back To News
Chuck Livingston
Marion Patriots Activities Network | 5/23/2022
PRIVACY POLICY | © 2022 MASCOT MEDIA, LLC