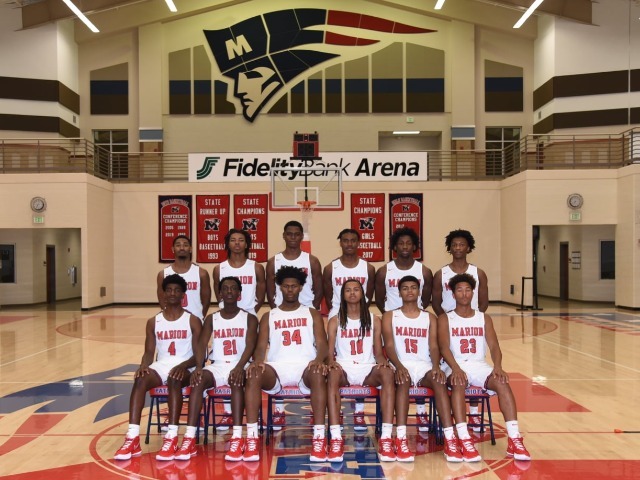 Tweet
Dissecting the 2020-2021 Marion boys basketball season can be a complicated process. The highlights of an 18-4 season are numerous. Marion went 3-0 against West Memphis a year ago, and the Pats have won six of the last seven meetings with the Blue Devils. Marion's four losses came against Class 6A Bryant, and two were to eventual state champion Jonesboro. Which leaves the last loss, a two-point defeat to Maumelle in the opening round of the state tournament, Marion's first opening-round loss since 2016. Jonesboro wound up beating Maumelle the second week of March for the state title. “The two teams that beat us played for the state title and we beat Little Rock Central, which played for the 6A title,” said Coach David Clark. “I thought we were one of the top four or five teams in the state by the end of last year. We just want to be more focused and prepared going into this year to close the deal and win the state championship.” Winning a state championship is no foreign concept to Clark, who guided Marion to the 2019 Class 5A title in his first season. Clark has reason to believe 2021-2022 team could produce similar results this winter. “The kids who are seniors this year were ninth-graders when I first got here and installed my program,” said Clark. “We've put an emphasis on training up with the youth programs and those guys have all developed into pretty good basketball players.” This installment of Marion hoops “will be the biggest, possibly the most athletic team I've ever coached,” said the coach, who was an assistant at Little Rock Hall before coming to Marion. “We have seven or eight kids who can dunk the basketball. We're talking athleticism, playing above the rim, rebounding and being quick up and down the floor. It's going to be fun to watch.” The 5A East league champion has won or shared the state title every season since 2017, including Jonesboro three of the past five years. Jonesboro, Marion and West Memphis project as three of the better teams in the state again this season. “Our emphasis is to beat those two teams (Jonesboro and West Memphis),” said Clark. “Every coach in our conference does a great job and if you don't bring it night in and night out then you'll get beat.” Marion hosts Little Rock Hall November 8 at Fidelity Bank Arena in the annual benefit game. The Pats host Hernando, Miss., the following night in the season opener. Marion will participate in four holiday classic tournament in November and December. The Pats play a mystery opponent November 20 at the Hoopin' 4 Hoodies classic in North Little before headlining the Rumble on the Ridge in Forrest City November 25-27. Marion hits the road in December to play in the Trojan Invitational in Hot Springs and for the Route 77 Christmas Tournament in Carbondale, Ill. Marion opens league play January 7 at Fidelity Bank Arena against West Memphis. BACKCOURT Marion should boast one of the more productive backcourts in the state this winter, regardless of classification. All-state junior point guard Jayden Forrest and all-conference shooting guard Ryan Forrest, who are cousins, have started the past two varsity seasons for the Pats. “Jayden can really shoot the ball,” said Clark. “Ryan is an energetic athlete who can really score the ball. People compare him to Malik Monk. I think this could be both of their big, blow-up years.” Jayden Forrest averaged 15.1 points per game with three assists a season ago, when Ryan Forrest averaged 12.3 PPG with five rebounds. Ryan and Jayden Forrest own offers from Oral Roberts. Freshman Terrion Burgess, who is 6-8, moved to Marion during the off-season, and “he'll have an immediate impact on our program,” said Clark. Burgess owns offers from Auburn, Texas Tech, Central Arkansas, and Arkansas-Pine Bluff. Senior Darrion Love offers shooting ability while junior Donnie Cheers, who led the football team in every receiving category, is “a super high energy guard who plays above the rim,” said Clark. “He gives us a punch we need that we really didn't have last year.” Martavious Davis and Zyon Parnell offer defensive prowess. “They're both fast and aggressive,” said Clark. “I love how hard they play.” FRONTCOURT Look for the versatile Burgess to log many minutes at small forward this season. Eli Love joined the team during the off-season. Love “has a massive basketball IQ and knows how to play,” said Clark. Sophomores Jaylin White and Caden Nesbitt “will become excellent players,” said the coach. “They'll help us this year, but they'll blow up in the future.” Center Omareion Jefferson turned in a tremendous off-season under the direction of strength coach John Simmons. “He's developed into a great player,” said Clark. “He's gotten his weight down and and earned everything he's gonna get. He gets better every, single day.” Hard-nosed senior Donte Moore, who was a Team Captain for the football team, rotates at center.
Back To News
Chuck Livingston
Marion Patriots Activities Network | 11/15/2021
PRIVACY POLICY | © 2022 MASCOT MEDIA, LLC