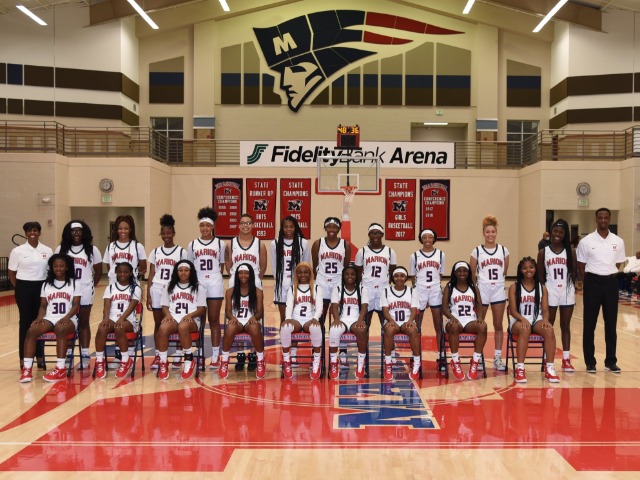 Tweet
Marion head girls basketball coach Shunda Johnson pulls no punches when asked about her team's prospects for the 2021-22 season. “Coach (Renaldo) Clay and I both believe this could be a really special season,” said Johnson. “On paper, everything looks good because we return some key players, some of our better players.” Entering her 10th season at the school, Johnson has guided the Lady Patriots to heights previously unseen, including the 2017 Class 6A state title and three other appearances in the state semifinals, a round Marion had never reached prior to 2017. Marion journeyed last season to the state semifinals by knocking off 5A Central champion Little Rock Christian in the first round before rallying past Russellville in the quarterfinals. Jonesboro eliminated Marion in the semifinals before winning the state title a few days later. Johnson said 10 of her players on this year's team played AAU during the offseason, by far the most at Marion since 2016. During an industrious off-season, Johnson and Clay trained their players to embrace the concept of position-less basketball. “We don't really have a true big,” said Johnson. “We have some bigger players, but no true center. College coaches now are looking for position-less players. We don't want our players to be as robotic in their movements.” To make the state tournament a 10th straight season, Marion must finish in the top four of the 5A East standings. “Jonesboro has a great program,” said Johnson. “West Memphis was a young team last season, and has a good core. Paragould is a much-improved program, and Greene County Tech could get in the mix. Batesville lost a key player (Missouri signee Izzy Higginbottom), but a lot of their other girls return.” BACKCOURT Look for junior Keira Neal to play every position at times this season, depending on the matchup. Neal is “a big guard who can play,” said Johnson. “She does a little of everything for us, and she's good at it all.” Senior Jessica Robins returned to the team during the offseason. She did not play last year, but produced an excellent sophomore season. Sophomore Ny'asia Jackson started for the varsity last season and could prove the team's top playmaker. Jackson impressed coaches during the offseason by raising the level of play of younger players during drills. Jackson improved her three-point shooting during the off-season. Junior Briana Dyson could be the team's most improved player. Juniors Falencia Selvy and Taylor Little project at shooting guard and small forward. Juniors Jordan Johnson and sophomores Carmen Dunn and Survanna Clay help in the backcourt. FRONTCOURT Senior all-state performer Daedrianna Cail anchors the frontcourt as an “incredibly high-energy player,” said Johnson. “She's a tremendous defensive presence.” Junior Alyse Holliman “does a great job posting up big, and finishing around the rim,” said Johnson. Sophomore Kysia Montgomery impressed coaches during the off-season by rebounding and playing good post defense. Seniors Sherlesea Terrell and Janaria Banister and juniors Aaliyah Taylor, Brineka Taylor, Jhordan Johnson, and Aya Johnson and sophomores Titianna Jackson and Shanell Lenear assist in the frontcourt.
Back To News
Chuck Livingston
Marion Patriots Activities Network | 11/15/2021
PRIVACY POLICY | © 2022 MASCOT MEDIA, LLC