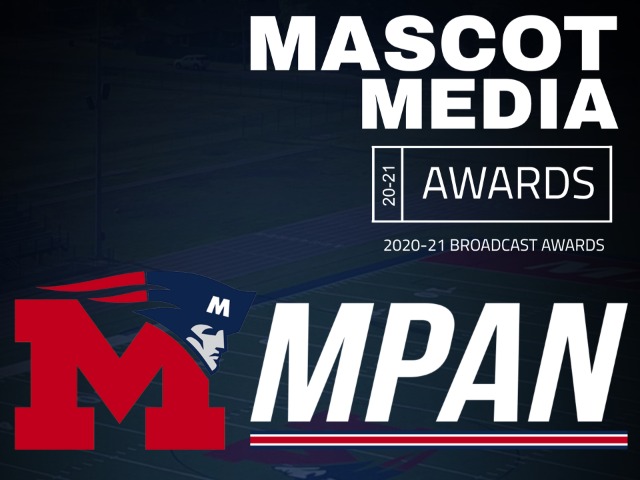 Tweet
The Marion Patriots Activities Network (MPAN) earned two national awards presented by Mascot Media Wednesday afternoon. MPAN, a finalist for six total awards during Mascot Media's year-end award show, was the only network to win multiple awards. MPAN provides free livestream coverage of Marion School District events at marionpatriots.com and through the Marion Patriots Mascot Media app. These live events include live commentary, stats, multiple camera angles, and more. The service is made possible through Mascot Media, which partners with schools and organizations across the country. MPAN earned the coveted Best Sports Network award, beating out nine schools, including Arkansas broadcast networks Fayetteville, Bentonville, and Conway. Other finalists included Texas schools Highland Park, Pittsburg, Waxahachie, Southlake Carroll, and Coppell, and Eastmont, Wash. Best School-Run Broadcast Team also went to MPAN, which beat out 11 other finalists for gold. Other Arkansas finalists included Fayetteville, Vilonia, Osceola, and North Little Rock. Out-of-state finalists included Arizona outfits Waxahachie, Trinity, Rankin, and Northwest Christian; Muskogee, Oklahoma; and Don Bosco Prep and Christian Brothers of New Jersey. MPAN was also one of 10 finalists for Most Broadcast Views and Most Events Broadcasted, one of seven finalists for Event of the Year, and one of five finalists for Mascot Media's Play of the Year. “We couldn't be more proud of our broadcast team's national recognition on Wednesday afternoon,” said Marion superintendent Dr. Glen Fenter. “We are pleased to be able to produce professional-quality broadcasts that showcase the efforts of our students. Through the dedicated work of our staff, parents, relatives, friends, and anybody else in the community can see some of the great things our students are doing, even when they can’t be there in person. MPAN is a great tool that we have to tell our community about the amazing things happening every day in our district.” The Marion Patriot Activities Network began broadcasting select live events in 2016 and presented more than 130 school events during the 2020-21 school year. “I'm blown away by the support we've gotten from our community and administration,” Marion communications specialist and regular play-by-play announcer Tyler Bennett said. “It's unreal how many people believed in this product and worked to make it happen.” A select number of National Honor Society students assisted with cameras and production during the 2020-21 school year, an opportunity that will be offered again this year. Former students have leveraged their experience working with MPAN into opportunities beyond high school. Two former MHS student camera operators have worked for Division 1 colleges as stadium and team camera operators. Another former student operated cameras for ESPN regional broadcasts. “This is nothing short of a testament to this incredible community,” former MPAN Athletics Media Specialist Landon West said. “We had so many people put aside their lives to make this a special product and it's nice for them to get this recognition.” Headquartered in Fayetteville, Arkansas, Mascot Media is a nationwide network of 19 athletic associations across 13 states, ranging from Washington to New Jersey. Mascot Media hosts almost 1,200 schools nationally, including almost 140 schools in Arkansas. With a growing enrollment of nearly 3,900 students, the Marion School District is committed to helping students develop the academic, social, and decision-making skills needed to become productive citizens in the rapidly changing technological world. For enrollment information, including information on school choice, visit